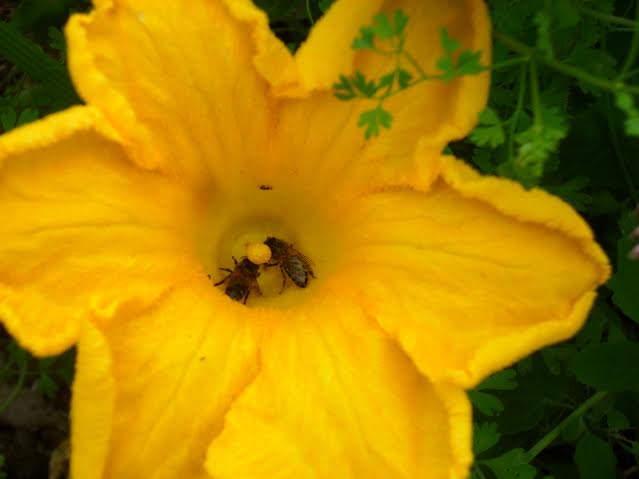 As you know, I live on an organic farm. To tell you the truth before moving here I almost didn´t buy any organic food. Why?

Watching my boyfriend working on the farm and getting involved in some of the activities made me finally understand why organic food is more expensive and its benefits. So, why choose organic?

In conventional agriculture toxic chemical fertilizers are used to increase crop yield and to influence fruit size (remember that big piece of fruit you bought in the supermarket the other day?). Toxic pesticides are also used to kill insects, but they end up killing as well needed pollinators, such as bees.

Organic farming doesn´t use any toxic chemicals. It respects nature´s cycles and its dynamics bringing to the consumer a product which grew at its own rhythm and in harmony with the other species, either plants or insects.

If you want to know more information about what you are eating, then you can check EWG´s website where you will get to know EWG´s 2016 Shopper´s Guide to Pesticides in Produce (Dirty 12 and Clean 15).

Genetically modified organisms (GMO) are produced in laboratory through methods that mix genetic information from species not sexually compatible (a fish gene can be introduced into a tomato!), but in practice this technology also involves the use of synthetic DNA sequences, resulting in a complete new combination, not tested by nature in any organism or ecosystem*.

Until mid-2011,  the European Union approved the import and commercialization of transgenic plants in seven species: soya, corn, colza, beet, cotton, potato and carnation flowers. In the United States the list is bigger, also including papaya, cantaloupe and plumb*.

3. No antibiotics and hormones in animal products

When you buy organic meat or dairy you know animals were raised in a healthy environment, with space to move, were fed with rations without GMO and didn’t take antibiotics or hormones.

Regarding the use of growth hormones, according to the Center for Food Safety some U.S. farms still use rbGH (recombinant bovine growth hormone) in cows to increase milk production. As a result, they become more prone to mastitis and have to take (guess what?) antibiotics. U.S. beef cattle are also fed with synthetic hormones to boost growth and production. However, the use of hormonal growth promoters is prohibited in the European Union.

Organic food — either from vegetable or animal origin — stand out in flavor. If you have never eaten an organic carrot, then you don´t know how a carrot tastes like! Please, eat one whenever you have the chance.

According to the Food and Agriculture Organization (FAO), organic agriculture contributes to sustainability, soil erosion control, reduces the risk of groundwater pollution, contributes to mitigating greenhouse effect as well as global warming and produces more biodiversity.

When you buy organic food you are supporting local farmers and not the food industry. They have chosen a more difficult path, but also a more sustainable one, for you, for me and for everyone else on the planet.